A young woman walks into a tunnel alone at night. Suddenly strange trenchcoat-wearing figures melt out of the walls, surrounding her and chanting, “”Come to our world!”” Ayane Isuzu, a high school girl, emerges from the darkness and single-handedly defeats the creatures, saving the woman. Nearby, Miyu Manadzuru, another high schooler, avoids a pushy companion by ducking into an alley and flying into the sky. Ayane spots the flying girl in the night sky. At school the next day, Ayane is revealed to be a cynical loner, known as being into technology and labeled a weirdo. Meanwhile, an inspector looking into a car accident finds one of the trenchcoat-wearing figures in a wrecked man. The figure disappears, leaving a small crystal behind. Ayane meets with Nazo, a mysterious older man who tells her to seek out Miyu since Miyu’s a Gate Keeper. Ayane also gives him a bag of crystals (what’s left of the Invaders she fought) in exchange for money. That night, Ayane invites Miyu to join her so Miy 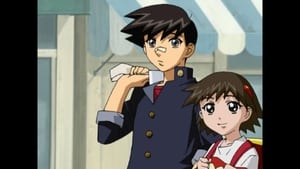