A strange, ghostly figure of a girl floats above a street scene, laughing. She seems to be causing car accidents below her. Meanwhile, the police chase a runaway vehicle. Ayane and Miyu are riding Ayane’s scooter and on the vehicle’s tail as well. Ayane opens the Gate of Illusion behind her to throw the police off the chase. Miyu uses the Gate of Flight to catch the truck, but she smacks into a highway sign instead. The next day Ayane complains to Reiji about Miyu’s performance. He drives off and, stuck in a traffic jam, is attacked by Invaders. He eradicates many of them with his Black Gate and Gate of Foresight. The surviving Invaders flee. Reiji possesses great Gate powers, but each time he uses them it physically weakens him. As Miyu and Ayane talk at school, Miyu discovers Ayane’s glasses are made of ordinary glass. They spot what seems to be a ghost. Following the ghost, Miyu and Ayane stumble across an elevator to an underground complex, the remains of the original Far East bran 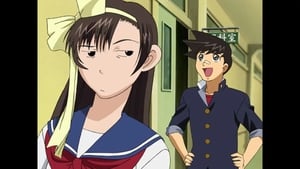