Reiji, Yukino, and Satoka gaze, from a safe distance, at the mammoth Invader machine growing larger by the minute. Reiji says it’s hopeless, but they must fight anyway. Miu visits Ayane, who’s still in a coma. Miu confesses to the silent Ayane her weakness and her dream of flight. Reiji harms himself fighting the winged Invaders. Satoka raises a huge blade from her Gate and foolishly plunges into the attackers. Yukino teleports to the top of the Invader machine, right next to Ghost Girl. Ghost Girl reveals that her Gate of Disappearance made her what she is. The two face off. Yukino’s ice pierces Ghost Girl but doesn’t harm her. However, Ghost Girl’s blast knocks Yukino off the Invader construct. Miu flies up and catches Yukino, but Yukino’s deeply wounded. Yukino disappears in Miu’s arms, leaving behind only the uniform Miu gave her. Miu flies up to fight the Invaders, but her power leaves her half way up and she plummets to the ground. She lies surrounded by winged Invaders. Meanwhil 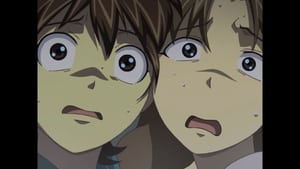