The Return of XL

XL has found that the primary difference between he and XR is that XR has a component called an “”AFD””, so he kidnaps XR and removes his AFD. In order to locate a new one, XR ditches Team Lightyear, goes to TradeWorld and contacts Crumford Lorak, who directs him to a semi-black market dealer in robot parts called “”The Fixer””. The Fixer has XR work as a delivery boy in order to work up the funds for buying a new AFD. When XR goes to the one source for AFDs that The Fixer knows about, the source turns out to be XL, who set up a “”fake”” ad for “”spare AFDs”” in order to lure XR in. XL hooks up XR to a Star Command G-Force Trainer (which XL likes to call his “”centrifigator””), but Team Lightyear (after trailing XR for most of the episode) shows up in time to let XR know that the AFD is just an Air-Freshening Device (country fresh scent). 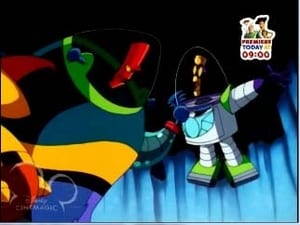