Buzz captures “”Pen-like Activation Device”” for Zurg’s HYPER-DEATH RAY in a fairly accidental manner (Buzz thinks that it MUST be important and just LOOKS like a pen…everyone else thinks that it MUST be just a pen and that Buzz LOOKS to be going a little loopy…); Buzz is sent to Rhizome to work out overworking-stress with Tubunch. Zurg goes to Rhizome to get a clear shot at Star Command with his HYPER-DEATH RAY, unaware that Buzz is there. Buzz channels his emotions and uses the Rhizome plant-tech to stop Zurg. 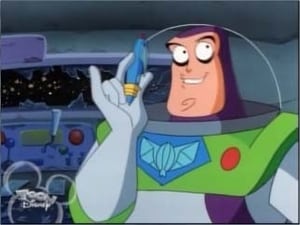