Shiv Katall is stealing numerous high-tech devices; this seriously confuses Team Lightyear, since Buzz and Commander Nebula were the only ones to take on the guise of Shiv. Shiv turns out to be actually Buzz Lightyear; the EVIL Buzz Lightyear (…it only makes sense that he would’ve come up with the whole Shiv idea in HIS universe as well…). When Buzz (…the evil one…) flies too close to Capital Planet’s sun for 42’s scanners to detect his location, Mira and Buzz (…the good one…) fly down in Star Skimmers to try to find him. They discover that Buzz (…the evil one…) is working with Gravitina, setting up another device that can boost her psycho-gravimetric powers to such a degree that she can cause “”sun-quakes”” that can launch solar plasma-balls towards Capital Planet, Star Command Headquarters, and just about any planet whose solar system is nearby (…Tangea is mentioned as a possible target…). 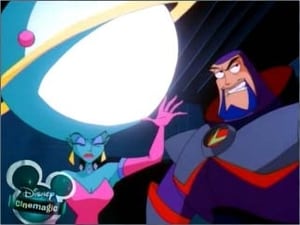