Professor Reddschift, Mira, Booster, and XR are pinned down by Zurg’s hornets, who are attempting to kidnap Prof. Reddschift. The Prof. is worried that Buzz won’t be able to arrive in time to save him from capture. To try to buck up his spirits, Mira relates her first encounter with Buzz, back before she enlisted in Space Ranger Academy. King Nova had been nabbed by Zurg and his Hyper-Hornet in the midst of a conference attempting to convince Tangea to join the Galactic Alliance, but Mira & Buzz managed to defeat Zurg, save King Nova, and convince Tangea to join the Alliance (and Mira to join the Space Rangers). This proves to be less than impressive to Reddschift. Booster then relates HIS first run in with Buzz. Zurg had attempted to take over Jo-Ad with his Mega-Hornet, thus cutting off food supplies to most of the Galactic Alliance. But with Buzz’s timely arrival, and with Booster’s strength, they managed to stave off Zurg. Again, Reddschift isn’t impressed. XR then tells H 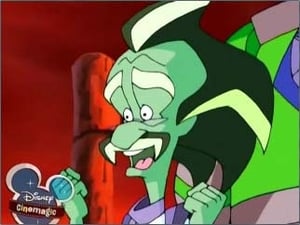