After an inspection of planet Rhizome’s bio-defenses, Team Lightyear are all given energy plants by Professor Triffid. Booster instead picks up a red one instead of a white one (the white ones pretty much just sit there and produce electricity via photosynthesis, the red ones convert the extra energy into advanced growth), and the plant is slowly taking over the ship, and then Star Command itself. XR has begun to give unauthorized tours for Buzz Lightyear fans behind everyone’s backs. At the same time as Booster & Mira attempting to quell the swarming plants, and XR trying to keep Buzz from finding out about the tours, Buzz is attempting to locate and identify a conspirator that is somewhere on Star Command (…actually one of Zurg’s grubs in an LGM suit…) 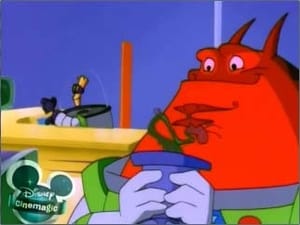