Comm. Nebula sends Team Lightyear to Mahambas 6 to investigate a gravity problem. It turns out to be Gravitina, making a distraction so she can see Buzz and ask him out. He, of course, refuses, and she’s then convinced it’s because of her head. To get even she zaps Buzz with a gun that makes HIS head huge, and since it’s causing a problem at Star Command (he has a bit of a “”head problem””, if I may joke outrageously) he has to leave. Well, Buzz decided he didn’t like these arrangements, so he went to confront Gravitina. Anyway, team Lightyear was there, they had tried the same thing before, it didn’t work very well. Buzz Lightyear defeats Gravitina, his heads back to normal, everyone (except, possibly, Gravitina) lives happily ever after. 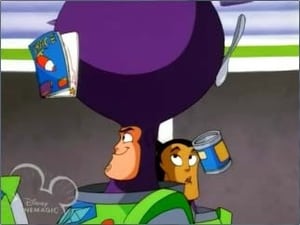