On Earth, the Grand Elder dies again, but before his death, he gives his power to Moori, one of his eldest sons, making him the new Grand Elder, and thereby preserving the power of the Namekian dragon balls. Meanwhile, on Namek, the dying Frieza begs for mercy from Goku. Despite his better judgement, Goku cannot ignore Frieza’s pleas for help and gives the tyrant some of his own ki before departing. However, Frieza lets his pride get the better of him and unleashes one final ki blast at Goku, but the Super Saiyan easily repels the blast right back at the tyrant and seemingly destroys Frieza in the process. Goku then attempts to escape in Frieza’s spaceship, but is unable to make it take off. Namek finally explodes and it appears that Goku perishes along with the planet. 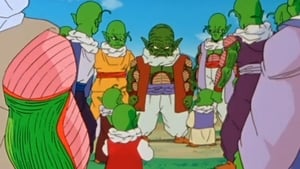