Found You, Gohan! Harsh Training in the Realm of the Kais!

Goku arrives in the Realm of the Kais where Gohan is training with the Z-Sword, deciding to help him with his training. Meanwhile, Buu, who has already killed two thirds of Earth’s population, comes across a blind young boy and heals his vision, becoming surprised when he thanks him instead of being afraid. With Gohan growing more proficient with the Z-Sword, Goku tests out the sword’s sharpness by throwing a metal cube at it, only to inadvertently break the sword in half instead. However, from the broken sword emerges the Supreme Kai of fifteen generations ago, Old Kai. 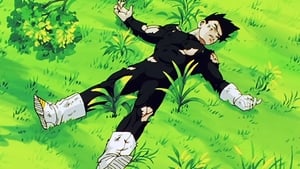