Born From Anger - Another Majin!

After managing to calm down Buu’s rage by dealing with the thugs himself, Mr. Satan discovers that the dog is barely alive, with Buu managing to heal him just in time. As Buu, Mr. Satan, and the dog start becoming closer, Mr. Satan decides to stop taking advantage of Buu’s innocence and become his earnest friend. However, the thugs from earlier show up and shoot Mr. Satan, once again causing Buu to be overcome with anger. After healing Mr. Satan, Buu instructs him and the dog to get away from him, as the evil in his body escapes and transforms into a tall, grey, emaciated version of Majin Buu. 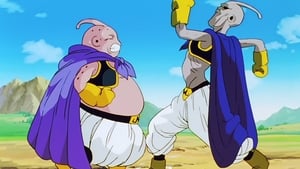