Unknown to the others, Buu secretly separates two chunks from his back, and the two pink blobs creep around behind the others. As soon as Goten and Trunks fuse, one of the blobs encases Gotenks. Piccolo, too, has been covered by a pink blob. Buu calls each of the blobs back to him, which merge with him, changing his appearance and giving him access to all of Piccolo’s and Gokenks’ memories, abilities and power. The new and improved Super Buu then fights Gohan, and it’s clear that Buu has the advantage. Gohan is unable to keep up with Buu’s new speed and strength. Buu taunts Gohan by telling him what his three friends that were absorbed think of him. 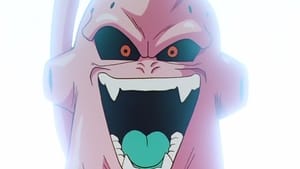