Gohan is no match for the new Super Buu. Buu now possesses new skills, such as the Super Ghost Kamikaze Attack and the Special Beam Cannon, each of which he uses on Gohan. He is about to finish Gohan, when Bee comes running up. Hercule tries to save Bee, but is only several times stronger than the average human – nothing compared to Buu. Buu is about to blast each of them when Gohan saves them. Buu then uses Gotenks’ Galactic Doughnut trick on Gohan, and aims a Kamehameha wave at him, but Gohan is able to summon enough strength to break free and move out of the way in time. Meanwhile, in Other World, King Yemma decides to send Vegeta back to earth to help in the fight against Majin Buu. On the world of the Kais, Old Kai decides to give his life to Goku so he can return to Earth and fight Buu. The now deceased Old Kai gives Goku his earrings. He explains to Goku that if he and another person each wear one, they will fuse together. 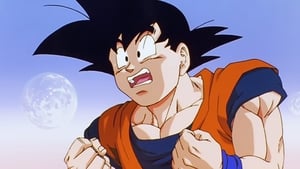