One Time Only Miracle… Will the Super Combination With That Guy Come About?

Old Kai tells Supreme Kai and Kibito to try a fusion with their earrings, but only after they fuse together does he reveal that it is a permanent fusion. Dende heals Gohan’s injuries, so to prevent this from happening again, Buu creates a giant energy ball and aims it at Dende. Just before it hits, it is deflected by Tien’s Tri-Beam attack, who has decided to help, even though he is terribly outclassed. Buu tries again, but Goku suddenly appears and sends a disk of energy at the monster. It cuts off his legs and part of his head. His legs deal Tien a crushing kick which completely incapacitates him and then they return to Buu. Desperate to stop Majin Buu, Goku throws Gohan the other earring, but his aim is off and the earring is lost in the rubble. Goku goes Super Saiyan 3 in an attempt to hold Buu off while Gohan searches for the earring. Inside Super Buu, Gotenks’ fusion wears off, splitting back into Trunks and Goten, causing Buu to lose well over a third of his power and his appearance to change. Realizing what’s happened, Goku declares he can now defeat Majin Buu without fusing with Gohan and prepares to fight. Knowing he needs a massive power increase, Buu causes the part of his head that was cut off earlier to suddenly engulf Gohan, just like Piccolo and Gotenks. He reabsorbs the blob containing Gohan, and is now even more powerful than he was with Gotenks absorbed. Now back in control, Buu toys with Goku, telling him he has some time to find someone to fuse with. He considers fusions with Dende and Hercule, but neither of them are appealing possibilities. He suddenly senses that Vegeta has returned, and uses Instant Transmission to teleport to his location. While Buu is distracted, Dende heals Tien. After Goku finds Vegeta, Goku tries to convince him to fuse, but Vegeta is angry at Goku because he knows Goku was holding back his Super Saiyan 3 transformation when they fought. With Vegeta refusing to cooperate, they are forced to take on Buu as individuals, but are clearly outclassed. Goku tells Vegeta that Buu absorbed Trunks and killed Bulma and asks him to put their differences aside to save their people. Vegeta finally agrees, and only when he puts the earring on does Goku mention that the fusion is permanent. The two last surviving Saiyans fuse and a new being is created. 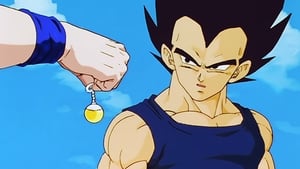