The new being names himself Vegito, and begins to fight Buu. He clearly is far superior to even the new Super Buu. In Other World, Bulma, Videl, Chi Chi, and Dabura are looking for Gohan, whom they mostly believe to be dead. When Dabura arrived at the Check-in Station, he resisted the guards attempts to subdue his aggressive behavior, and knowing Dabura would enjoy being sent to hell, King Yemma turned him good. Back on earth, Dende and Hercule arrive at the battle scene, just as Buu has decided to destroy the earth. He creates a massive ball of energy, and throws it towards the earth. Vegito easily catches it, and deflects it back out into space. Buu claims that he has yet to fight at his full power. Vegito says the same, and powers up to a Super Saiyan. Now calling himself Super Vegito, he continues to thrash Super Buu. Buu tries to hide himself with his own steam to gain an advantage, but Vegito continues to batter him. On the Grand Kai’s planet, Krillin and Yamcha are training with King Kai. Back on earth, Buu is starting to become desperate. He liquifies himself, and shoots down Vegito’s mouth, entering his body and turning him into what looks like a super-muscular version of himself. While inside Vegito, Buu takes control of his body and boasts that he will use him to destroy him from the inside, but Vegito uses his energy to isolate all of Buu into one spot and pound him. Buu moves around but Vegito simply continues to pound him. Buu is forced to exit Vegito’s body. Realizing he doesn’t know how he can save himself, Super Majin Buu begins to freak out, and the immense amount of energy he releases into his surroundings threatens to tear apart the universe itself. Realizing this, Vegito tries to stop him, but Buu has put up a shield around himself. After a long struggle, Vegito breaks through the shield and stops Buu. 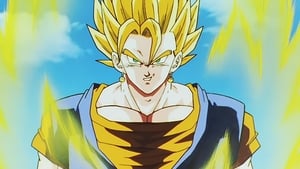