After absorbing Vegito, Buu notices that he has not taken on any of his characteristics. He guesses this is because he hasn’t digested Vegito yet. Inside Buu, Vegito still exists intact, and separate from Buu. It turns out that Vegito had planned this, putting up a barrier during the absorption, and letting himself be shrunk by Buu’s magic absorption process, but not incorporated into his being. Once he dispels the barrier, Vegito unexpectedly splits back into Goku and Vegeta. Taking advantage of this unexpected event, Vegeta crushes his fusion earring, not wanting to give up his independence from Goku by permanently fusing with him. He cites that once they free their absorbed friends, Buu will lose most of his power and they won’t need to be fused to defeat him. Goku and Vegeta cut down the cocoons of Gohan, Goten, Trunks, and Piccolo, and as they do, Super Buu regresses to his normal form. Dende and Hercule continue to follow Buu. Back inside Majin Buu, Goku and Vegeta also find the fat Majin Buu. They read his thoughts to find out what happened to him. Suddenly, a thought form of Super Buu himself appears. The two join forces to defeat it, but once they do, another one appears. They realize that this is a battle they cannot win. Buu finally decides that he’s had enough, and he tries to absorb Goku and Vegeta. 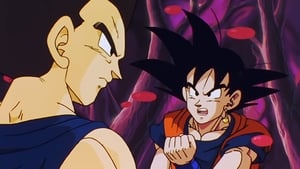