Emergency Escape from Inside the Body! Buu's Reverse-Transformation is the Worst!!

Goku saves Vegeta from being absorbed. As Vegeta recovers, Goku continues to fight the thought form of Super Buu. Goku is rapidly losing energy, and just as Super Buu is about to defeat Goku, Vegeta cuts down the pod containing the fat Majin Buu. This causes Super Buu to go mad, as without the fat Majin Buu absorbed, Super Buu cannot exist. As Super Buu’s insides begin to change, Goku and Vegeta realize they must leave, and so they grab the pods containing Gohan, Goten, Piccolo and Trunks and try to find a way out. On their way through his body, they notice one of the tunnels that leads to one of the holes in Buu’s skin where the steam escapes. They are able to fly out through here, and when they emerge on the other side, all six of them regain their normal size. As Goku and Vegeta set the pods down, they observe Super Buu changing into a different being. He first transforms into a hulking form, and then shrinks into a childlike version of himself. 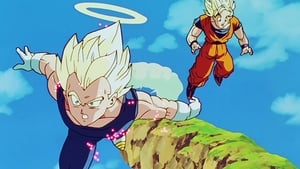