Supreme Kai explains to Old Kai that there were once one five Supreme Kais. He was one of the four that each ruled over a quadrant of the universe, and the fifth was their leader. He says that this latest, childlike version (Kid Buu), is the original, true Majin Buu, and by far the most powerful of them all. Supreme North and West Kai perished against him. Supreme South Kai was absorbed, changing the original Majin Buu into the hulking form that was seen briefly in the previous episode. The leader, Dai Kaio, was then absorbed by that form, but this absorption changed Buu into the fat, happy Buu that came out of the ball. This absorption of the Kais actually weakened Buu, making him less focused and less destructive. Back on earth, Kid Buu creates a powerful ball of energy and throws it at the earth, intending to destroy it. Goku and Vegeta deflect it. In retaliation, Kid Buu then a creates a ball ten times more powerful than the previous one and throws it. Knowing that they currently do not have enough strength left to stop it, Goku and Vegeta try to grab everyone and teleport away, but are only able to grab Dende, Hercule, and Bee. As the Earth is about to be destroyed, Supreme Kai appears and instantly transmits Goku, Vegeta, Dende, Hercule, and Bee to the world of the Kais. 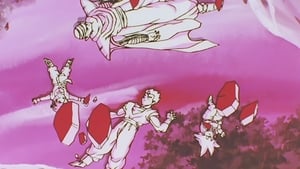