Goku continues to fight Buu, and he seems to have the upper hand. He deals a lot of damage to Buu, but as the fight goes on, his hits become weaker and weaker until they have virtually no effect at all. He tells Vegeta that it’s his turn, but Vegeta declines, deciding that he is no match for Buu. He tells Goku that Buu is too powerful for him and that Goku stands a much better chance of destroying him. Goku is shocked and unsettled by this admission, telling Vegeta that he deliberately let the fight drag on so that Vegeta could have a turn, and that now he is exhausted. Vegeta is horrified by this, because now they cannot stop Buu. Goku unsuccessfully attempts to reassure Vegeta, telling him that he needs one uninterrupted minute to power up enough to destroy Buu. Despite the fact that Vegeta recognizes that he will need a miracle to survive a minute against Buu now, he reluctantly steps in while Goku is powering up, even though Goku tells him that if he is destroyed when he is already dead, Vegeta will no longer exist in any form. Buu thrashes Vegeta, but every time he gets knocked down, Vegeta gets up, ready for more. Buu stretches out his arm, wraps it around Vegeta’s neck, and begins choking him for fun. It’s been more than one minute, but Goku still hasn’t generated the power he needs. 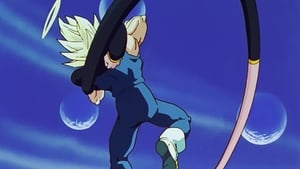