A Secret Plan Comes Together in a Flash - Please Grant These Two Wishes!

Fat Majin Buu enters the fight, saving Vegeta from death. However, he is no match for Kid Buu, who begins to severely beat him. Hercule tries to help Fat Buu, but is ineffective. Vegeta suddenly comes up with a plan. He communicates with Dende, telling him to go to New Namek and gather the Dragon Balls. The Supreme Kai and Old Kai take Dende there, and the Namekians are waiting with the seven balls. Porunga is summoned, and Vegeta tells Dende his two wishes: bring back the earth and restore it to its undamaged state, and bring back all of the non-evil people that died since the morning of the World Martial Arts Tournament. These wishes are granted, and even Vegeta himself comes back to life, proving that he is no longer evil. He finally reveals the main part of his plan to destroy Buu: the Spirit Bomb. 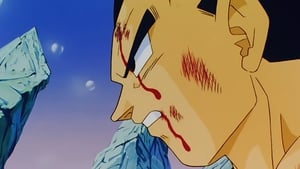