The Savior of the World is You! Everyone's Spirit Bomb is Completed!!

Vegeta continues to plead with the people of earth, but no one will listen to him. Fat Buu has finally lost all of his energy, so Vegeta is forced to fight Kid Buu. He is no match for him, and gets severely beaten. Now Goku asks the earthlings to raise up their arms and donate some of their energy, and small pockets of people who recognize his voice or just like the sound of it do so, but the vast majority remain uninterested. Piccolo, Gohan, Goten, and Trunks spread out into the city, hoping to convince people to raise their arms. Hercule has finally had enough, and he speaks to the people of earth. When they hear the familiar voice of the “World Champion,” all of the people of earth raise their arms and offer their energy. The Spirit Bomb is finally ready. 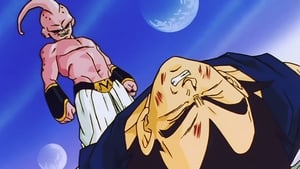