And So, After 10 Years... The First World Martial Arts Tournament in a Long Time!

Ten years have passed, and much has changed. Gohan has become a scholar, and Trunks and Goten are in their late teens. Goku is training with Goten when Bulma and Vegeta, who have a new daughter, Bulla, show up after not seeing him in five years. Goku says that he and Goten will be entering the World Martial Arts Tournament, so Vegeta says that he and Trunks will do the same. The day of the tournament comes, and old friends catch up. Everyone has arrived to watch. Gohan, who is now married to Videl, has decided not to enter, but his daughter, Pan, will fight. Since there is no junior division this time, she will be fighting with the adults. Hercule and Buu will also be fighting. However, Goku says that there is someone who is 100% human that can threaten to beat him and Vegeta. The seeding draw for the tournament begins, and Goku asks Majin Buu to use his magic to rig it so that he faces the powerful mystery fighter he had talked about. In the first match, Pan faces Wild Tiger, and the four-year-old easily dispatches him. Next up is Goku against a ten-year-old boy named Uub. Uub is the reincarnation of the evil Kid Majin Buu. King Yemma apparently heard Goku’s wish right before the evil Buu was destroyed, and he reincarnated him as a good person named Uub. Uub is apprehensive, so to bait him into fighting, Goku eventually resorts to taunting the young boy. After a particularly nasty insult and a kick to the face, Uub has snapped, and is now ready to fight. 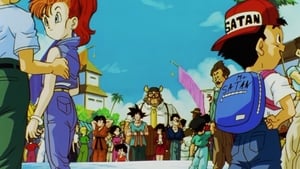 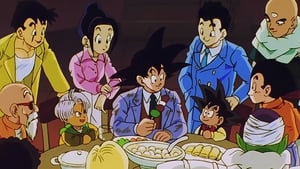