Super Buu and Gotenks begin to fight, and Gotenks decides to use some of his new special moves. The problem is that these moves, while flashy, are ineffective against Buu, not to mention they have ridiculous names, like the “Screaming Angry Wombat”. After it is clear that these moves have no effect, Gotenks talks strategy with Piccolo. He then creates a ring of energy, the “Galactic Doughnut” and uses it to trap Buu. After a brief struggle, Buu is able to break the ring. The two then do a bit of real fighting. Gotenks decides to use another one of his special moves, called the Super Ghost Kamikaze Attack. He spits out a ghost of himself, and plans to use it against Buu. Gotenks creates ten ghosts that detonate with explosive force when they are touched. He sends all but one at Super Buu, and they reduce him to a deformed puddle of his former self. Gotenks sends the final one down Buu’s mouth, blowing him into tiny pieces. Gotenks and Piccolo destroy all of the pieces, but the smoke coming from the pieces gathers above their heads and reforms Super Buu. To play up the drama of the situation, Gotenks acts like he’s out of ideas, and Buu begins beating up the fused Saiyan. Thinking that Gotenks cannot stop Buu, Piccolo destroys the door to the outside world, which traps the three of them in the Chamber for all eternity. 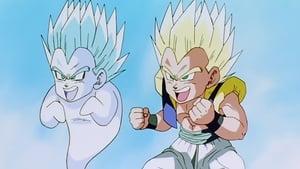