Gohan arrives at the scene, and everyone is shocked at how much power he has. After Gohan expertly pounds him to a pulp, Buu heals himself and steps up the intensity, but Gohan still has the upper hand. He is easily picking Buu apart. Realizing that he’s totally outmatched, Buu decides to self-destruct, hoping to take Gohan with him. Gohan escapes before Buu explodes, and he takes the others with him out of the blast radius. Afterwards, there is no sign of Buu, but Gohan knows that he’s still around. They suddenly detect Dende’s energy signal, and they go to find him. On the way, they pick up Hercule Satan and the dog, Bee. Dende explains that as Buu was escaping through the interdimensional hole, Mr. Popo threw him from the lookout, because without Dende, there would be no Dragon Balls to grant the wishes they intend to use to reverse all the damage. Buu tracks them down, but instead of having a rematch with Gohan, he calls out Goten and Trunks. 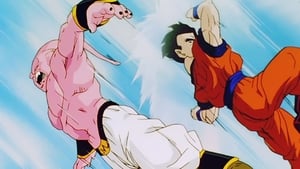