One evening, Mimi and students were stargazing through a telescope. When Creampanda peeped into the telescope, burning objects were falling. When Anpanman landed on one of them, Princess Yada appeared. The princess said that her home star of Yada was full of garbage, and asked for Anpanman’s help. Anpanman thought that only Gomira could solve this and headed for Yada star with Gomira.
However, on Yada star Baikinman and the giant robot “Dust Demon” were waiting in ambush. 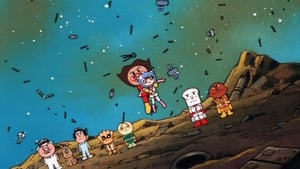