As the story unfolds, we meet the three main monsters: Frank, the monster from Frankenstein; Drac, the vampire, and Wolf, the werewolf. They were once the scariest of monsters, but now they have become associated with “fun.” That’s why they have been called before the Court of Horrors. They must prove that they can still be scary, and if they fail they will be sentenced to an eternity of entertaining at children’s parties. They are given 24 hours to terrify the Tinklemeister family, but what should be a no-brainer turns out to be a nightmare. Mom and Dad Tinklemeister are easy to scare, but Stella and Spike, the Tinklemeister children, are another story altogether. The monster trio becomes frustrated and finally lets the family in on their dilemma. The Tinklemeisters understand and help them try to gain back their scary status. Just when it looks like the threesome will win their case, three new modern monsters show up to foil their plan. It’s Stella and Spike to the rescue. 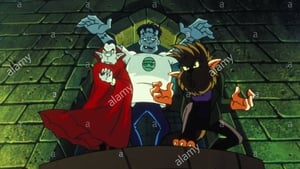