Dare to be square! In a world where “The only good pumpkins are round pumpkins!” SPOOKLEY THE SQUARE PUMPKIN is often teased by the other pumpkins because of his odd shape. Soon, Spookley is befriended by Edgar, Allan and Poe, three hilarious spiders, who convince Spookley that square or not, he has a right to be the “Pick of the Patch” on Halloween. “A square pumpkin the Pick of the Patch?” Not if mean round pumpkins Big Tom and Little Tom can help it. These two bullies tease and taunt Spookley because of his square roots. Encouraged to continue to become the “Pick of the Patch” by kindly Jack the Scarecrow and his bat sidekicks, Boris and Bella, Spookley isn’t sure he has what it takes until a mighty storm threatens to destroy the entire patch. As the storm rolls the round pumpkins uncontrollably across the patch towards the raging river, Spookley realizes “it’s fine to be round while the weather is fair, but there are times it’s better to be a square!” 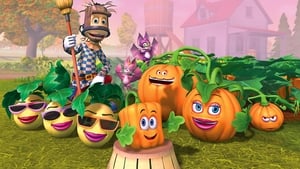