6teen is a Canadian animated sitcom, which premiered in Canada in 2004 on Teletoon. In the USA, 6teen first premiered on Nickelodeon on December 18, 2005 and was removed from the schedule on May 13, 2006. 6teen was previously aired on The N in reruns on December 26, 2005 until July 28, 2006, but then returned to The N as a 24-hour channel on December 31, 2007 until June 21, 2008. In the US 6teen was shown on Cartoon Network after its premiere on October 23, 2008. On Cartoon Network, 6teen had frequent airings weekly since its premiere on October 23, 2008, but got removed from the schedule in mid-November 2009. Then it returned with frequent airings in mid-February 2010, and once again got removed after its series finale on June 21, 2010. In January 2011, 6teen returned for one month only to Cartoon Network, but got removed, with other cancelled series, due to a schedule revamp. It is occasionally shown on Popgirl.

The series finale, “Bye Bye Nikki? Part 2”, included an acoustic remake of the theme song by Brian Melo. 6teen ended with a total of 93 episodes. DVD and iTunes releases have been made in both Canada and the USA. Though ended, creators Pertsch and McGillis both extended a willingness for a possible two-hour reunion telemovie or a feature film. As of now, it is currently not on Cartoon Network’s schedule, but episodes are available from Cartoon Network on Demand in select areas. On January 3, 2011, 6teen returned with reruns to Teletoon, where it airs weekend mornings at 3:00 a.m. EST, and it recently returned to its former weekday schedule at 7:00 p.m. EST. The show is also available on Netflix streaming in the US and in the UK. 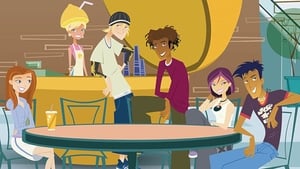