Boys Be… is a manga created and written by Masahiro Itabashi and illustrated by Hiroyuki Tamakoshi, which was in 2000 adapted into a 13 episode anime series by Hal Film Maker.

Three different Boys Be… manga series were serialized by Kodansha in Shukan Shōnen Magazine. In 2009 Kodansha announced a fourth series, Boys Be… Next Season, starting in the November 2009 issue of Magazine Special. The second manga series is licensed in North America by Tokyopop.

The anime first aired on WOWOW in April-June 2000. It was licensed by The Right Stuf International. The first DVD volume of the series was released in North America on February 28, 2006. Comcast and several other cable providers have shown Boys Be On Demand in the United States through the Anime Network. This series was aired on AXN-Asia before it handed all anime broadcasting duties to ANIMAX Asia, and, unlike other AXN anime making it to ANIMAX, was never retained. It also aired on Spanish networks Jonu Media and K3. 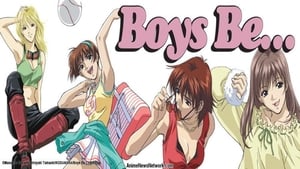