Jacob Two-Two is a Canadian animated TV series based on a trilogy of books written by Mordecai Richler that first aired on Canadian children’s channel YTV and aired on the French Canadian VRAK.TV as Jacob Jacob, in Spanish on Telemundo as Jacobo Dos Dos and in Portuguese on Canal Panda from Portugal as Jacob Dois Dois It also aired on ZigZap in the Poland and on Canal Futura from Brazil as ‘Jacó Dois Dois’. It was produced by Nelvana; before being put on hiatus in 2005, it has 61 episodes. In the United States, the show aired on qubo, a 24 hour children’s television channel in 2006. It also aired on Jetix UK from April 14, 2007 and on CITV in the UK from Spring 2006. The series is set in the Canadian city of Montreal and follows Jacob Two-Two and his friends on their wild adventures, most of which are one-shots that are resolved in a single episode. 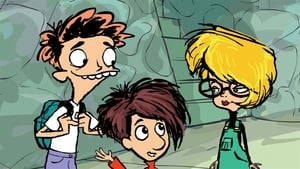