Jing: King of Bandits, also known as King of Bandit Jing, is a seven volume manga series by Yuichi Kumakura about the adventures of the bandit Jing and his partner Kir. The manga was adapted into a 13 episode anime series produced by Aniplex and directed by Hiroshi Watanabe as well as a Game Boy game released in 2000 by Messiah. The anime series aired from May 15, 2002 to August 14, 2002 on NHK in Japan. The manga is licensed in English in North America by Tokyopop. ADV Films licensed the Jing: King of Bandits anime series for $50,000. ADV had also licensed the Seventh Heaven OVA, however in 2008, the OVA became one of over ADV titles transferred to Funimation. As of September 1, 2009, all of ADV Films’ former catalog are transferred to AEsir Holdings, with distribution from Section23 Films

A recurring theme in Jing: King of Bandits is references to alcoholic beverages. Chapters are referred to as “shots”. Each storyline arc features at least one person who is named after an alcoholic beverage. In addition, each town or city is named after a cocktail, and Jing and Kir’s “Kir Royale” attack is also a cocktail, observed by his catch phrase “Gimme a Kir Royale” uttered almost every time before he uses it. More information about the specifics of each name can be found in the Tokyopop releases. 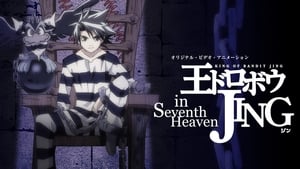