Ozzy & Drix, also known as The Fantastic Voyage Adventures of Osmosis Jones & Drixenol and Osmosis Jones: The Animated Series, is an American animated television series based on the Warner Bros. film Osmosis Jones and it was produced by Warner Bros. Animation. It takes place inside the body of teenager Hector Cruz. The series premiered on September 14, 2002 on the Kids’ WB; the final episode aired July 5, 2004. Unlike the original movie it spun off from, Ozzy & Drix was entirely animated and contained no live action. It stars Phil LaMarr as the replacement for Chris Rock as Osmosis Jones, and Jeff Bennett as the replacement for David Hyde Pierce as Drix. As of July 2011, episodes of the series are still available via the Kids WB website. The show also aired on Teletoon in Canada. The show is also slightly less violent than the movie, having the characters treated like people rather than simply cells, and having none of them killed off, unlike the movie where Thrax managed to kill off several cells. There are also new characters that replace the ones from the original movie such as Maria Amino replacing Leah Estrogen, Mayor Spryman replacing Mayor Phlegmming, Sylvian Fischer replacing Tom Colonic, Chief Gluteus replacing The Chief of Police, The Mole replacing Chill the Flu Shot and Scarlet Fever replacing Thrax. 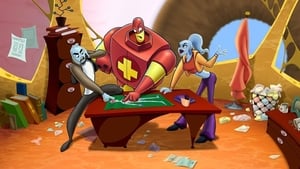